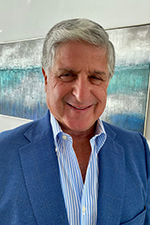 Art Anselene joined the RHLCT Board in May 2021 having previously served on the Trustees Advisory Board. He has lived in the Herndon area for 45 years working in the public sector.  He retired as the Town Manager of the Town of Herndon in 2017 after holding that position for ten years. Prior to his appointment as Town Manager, Art was the town’s Director of Parks and Recreation for thirty-one years.  During his tenure, the Herndon Parks Department received three National Gold Medal Award for excellence in parks and recreation management.  Art has been an active member and past president of the Herndon Rotary Club, served on the board of the Cultural Arts Foundation of Herndon, the Herndon Optimist Club and other community organizations. He was elected into the American Academy of Parks and Recreation Administrators and is a Life member of the Virginia Recreation and Parks Society where he was awarded the FELLOWS Award for outstanding leadership. He has also served on the Commission of Accreditation of Parks and Recreation Agencies.